The Joys of Walking in Nature 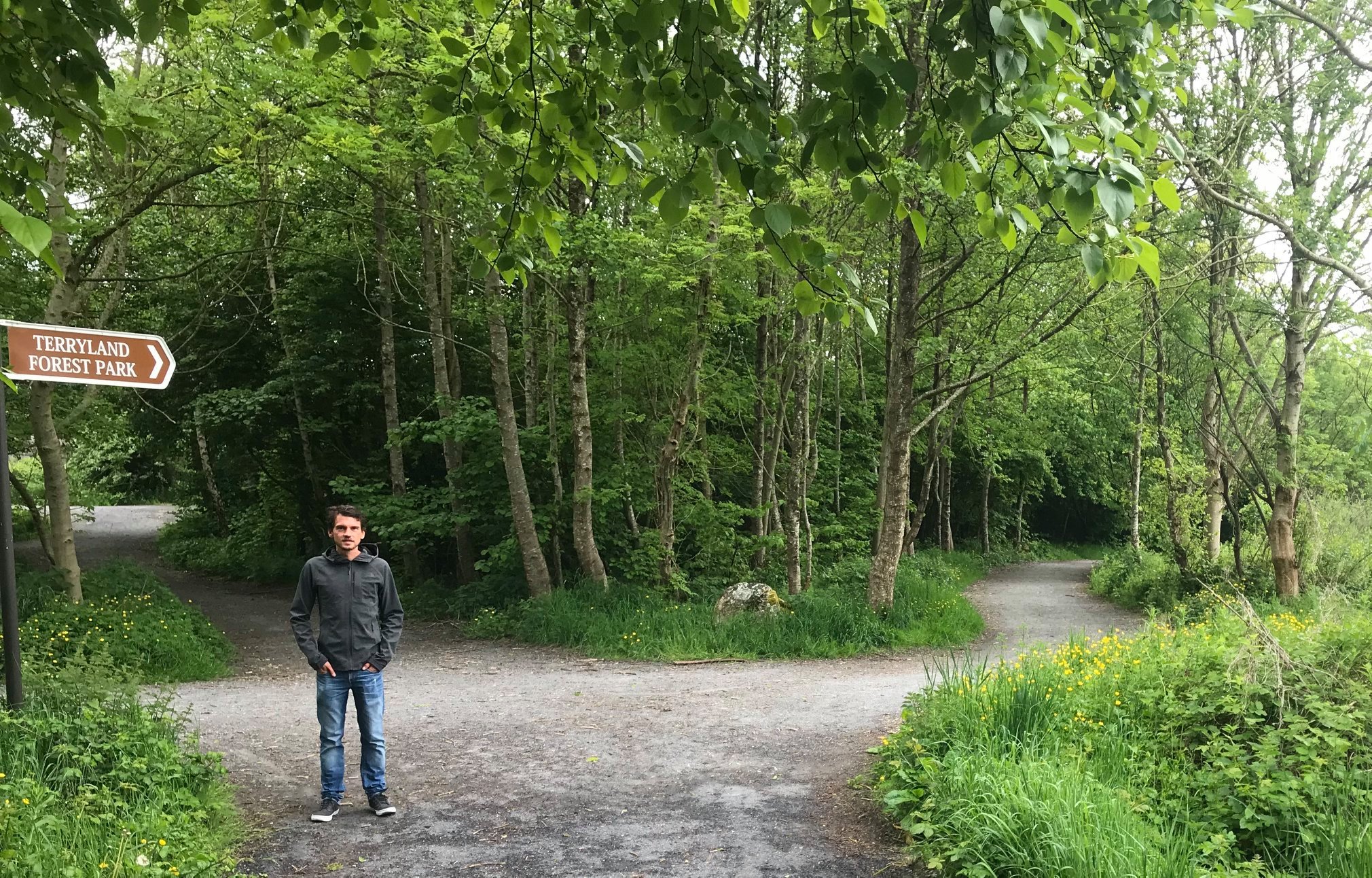 Over the last year, COVID has forced most of the population of Ireland to spend an unprecedented amount of their time at home. Cut off from family, friends and colleagues and unable to travel, home has changed from not only being our domestic abode but to also becoming our workplace, our gym and our play zone. But squeezing so much under one roof 24/7 is not easy and it can, if we allow it to, feel too often like a prison.

Most Irish people have never experienced this type of containment and isolation in their lifetimes. Concerns over mental and physical health issues have increased. This is not surprising as the human species is a communal animal; we need to socialise, to engage, to enjoy and to be challenged by the presence of others. Yet we also have to realise too that we suffer if we cut ourselves of from the natural world. Our disconnect with the rest of Nature after all has led to Climate Chaos and the present pandemic.

But on a purely personal level, staying indoors is not good for the mind, the body or the soul.

Modern science is now confirming that the traditional wise words of an older generation to ‘stop and smell the roses’, to ‘go take a walk in the countryside and breathe in the clean country air’, and the stories of the ‘happy gardener’ are true. On a basic level, trees and flowers emit the oxygen that gives us life, and take in the carbon dioxide and other gases that damage our health and that of the planet. On the other hand, the cars that have shaped our modern cities, our lifestyle and our societies emit huge amounts of vehicle emissions that we daily breathe in give us nothing good, are all bad, and some are toxic.

COVID has meant too that so much of our life as individuals has gone online. The Internet is indeed one of the great inventions of our modern era and has provided so many benefits including of course the ability to visually connect with anyone and everyone no matter where in the world they are.

But there are down sides that we should be aware off. Too much time spent on the Web, depending on the type of games and social media we are engaging with, can make some people exhausted, more vulnerable, sad, aggressive and can become addictive.

Research has shown that a growing number of children and adults are suffering from a lack of sleep. Melatonin is the so called sleep hormone. As a species we evolved to have a natural sleep-wake cycle based around the rising and setting of the sun. When we are exposed only to the sun’s natural light, melatonin levels are low during the day, and go up as darkness rises.

Exposure to the artificial light from the screens of electronic devices such as phones and tablets during the daytime can be fine and can actually stimulate alertness. But at night-time this ‘blue’ light can disrupt our natural sleep-wake pattern by tricking the brain into not producing melatonin.

So it is good practice for parents to turn off children’s electronic screens at least an hour before bedtime and maybe as a nice alternative encourage them to read a paper book. In fact for the last fifteen years in my series of Internet Safety/Cyberbullying Awareness talks to school communities, I also recommend parents to practice family ‘digital detox’ at least one night a week when all smart devices are turned off. Everything in moderation and in balance.

I also have always enthusiastically promoted in schools the social and health value in the Great Outdoors with the message to ‘go outside in nature to re-energise oneself.’

Research in the US and Japan shows that spending time in woods and near trees reduces stress levels, lowers the blood pressure, lowers the pulse rate, increases energy levels and improves the sense of wellbeing.

Breathing in the air of a forest boosts a person’s immune system. For while doing so we are taking in phytoncides, airborne chemicals that plants give off to protect themselves from insects and from decay. These chemicals have antibacterial and antifungal qualities which help trees and other plants fight disease. When we breathe in phytoncides, our bodies respond by increasing the number and activity of a white blood cell known as ‘natural killer cells’ (NR ) which kill tumor-infected and virus-infected cells.

Previous generations were aware of these health benefits. Which is why trees were planted in large numbers at many hospitals and why they had tree-lined (leafy ) suburbs built for the more wealthy classes in Ireland and elsewhere. It is why progressive teachers today are promoting the Outdoor Classroom and for which Galway city, with its natural green spaces, is ideally placed to support.

A 5km radius is a big world to explore

The 5km restriction imposed during the lockdowns meant that many Galwegians realised for the first time that they had a surprisingly attractive park on their doorsteps which they began to visit once or twice daily. Yet for some folk, these regular walks became after a while monotonous, boring and looked on as a bit of a chore.

But that would be a wrong attitude to take. First of all remember that the 5km perimeter is all directions, with you at the centre of a circle. That is a lot of territory to be able to visit! So vary the walks to explore different places on different trips especially those that have natural habitats. For the world of meadows, woods, riverbanks, and pasture land with their varied sights and melodious sounds of nature are a welcome calming relief to the harsh loud noises of cars and buildings. Nature is food to the mind and the soul. There is so much to see and to discover if one allows oneself to let go.

So begin the journey by undertaking ‘mindful breathing’. This can involve breathing in for four steps, holding one’s breath for four steps and then breathing out for four steps. Mindfulness slows down the heart rate, reduces stress and allows one to become aware of one’s inner self and one’s surroundings. Spring is a good time to get completely immersed in the natural landscapes around you as they pulsate with life after the winter sleep.

Challenge yourself to make every trip an fun adventure of discovery to find out the myriad of species that you share the city and hinterland with. Bring all your senses into action. According to Alex Strauss, the author of the Mindful Walker, “notice five things in nature you can see, four things you can hear, three things you can feel, two things you can smell and one thing you can taste” (the last is certainly not always recommended! ). Then whole new and exciting worlds will appear in front of you. Upon every tree branch, under every rock, inside every decaying tree trunk and within every rockpool there is a kaleidoscope of wildlife of many different colours, sizes and hue waiting to bewitch you.

In the part of Terryland Forest Park near my home I have, since COVID began, happily identified innumerable species of trees, fungi, wildflowers and birds and had the opportunities to experience the sights of foxes, hedgehogs and rabbits in meadows, woods and pasture. A pair of binoculars can be a real bonus to have with you. However we shall all be careful that we do not destroy the very things that we come to see. So please keep to the well-trodden paths and do not trample over forest floors and along riverbanks. Give wildlife the living space that it so desperately requires in this increasingly urbanised planet.

Remember too there are also lovely often forgotten treasures of our built heritage that dot the landscape, which are windows to bygone ages and are just waiting to be seen by those passing by. These include lime kilns, thatched cottages, abandoned farms, castles, prehistoric forts and An Gorta Mór (Great Famine ) relief works.

A precious gift from the past

We are blessed that Galway city is a nature walker’s paradise, areas that are zones of tranquillity. Every city In Ireland would love to have the natural resources and rural landscapes that we possess, namely the lakes, the streams, the grasslands, the bogs, the forests and farmlands. No other city has anything like a major river running through it that still retains large green landscapes on either side of its quiet blue waters.

The ‘Boreens’ of Menlo, Coolough, Castlegar, Ballindooley, Carrowbrowne and elsewhere are the gift to this generation from rural dwellers of past centuries. These country lanes, surrounded by drystone walls and hedgerows, that once were used to move cattle from field to field and to bring locals to distant church and shop, can become the Greenways of our modern city providing a network of green arteries uncluttered by built development offering places of peace and calmness to the urban traveller.

COVID should be a wake-up to humanity of what we doing wrong and what we need to do to recalibrate into the planet’s very delicate and very thin biosphere. As with all cities, Galway has to grow and to provide jobs, schools and housing for an increasing population. But it should do so sustainably by a redesign that places once again a safe city-wide walking, cycling and non-fossil fuel public transport infrastructure at the top of the transport hierarchy and by integrating the natural world into its fabric. The latter can happen by introducing green features into buildings and neighbourhoods; by connecting together large parks, small parks, waterways and the pristine shores of Galway Bay in order to create ecological corridors; by planting where possible hedgerows along roadways to improve both air quality and biodiversity; and by setting aside wildlife sanctuaries to protect our endangered native flora and fauna. For the cities of the future need to be ‘green’ as well as ‘smart’. This is what the movement known as the ‘Galway National Park City’ initiative is all about and why it is being championed by corporations, small business, third level colleges, schools, youth groups, doctors, health personnel, social workers, local communities, NGOs, environmentalists, artists, scientists, engineers and has the official support of President Michael D. Higgins, environmentalist Duncan Stewart, and Katheryn Tierney of the European Commission’s Directorate General Environment.

Walking and cycling capital of Ireland

The government recently announced that Galway City Council has been allocated twenty two new posts to support a walking and cycling network. This is indeed wonderful news. Among its tasks, this team though should first undertake an audit of what land in the city is public and is ‘commonage’ which should help to ascertain what boreens can be used by the public with the cooperation of local communities. There is also a requirement to look at transforming the Dyke Road-with its existing Terryland Forest Park, the Corrib waterways that reaches out to the shores of Galway Bay, and the Connemara Greenway (once the former railway bridge is reconstructed now state funding has been allocated ), linking into the nearby Menlo/Castlegar/Carrowbrowne boreen network and a future Headford Greenway- into a major green and blue hub that would make Galway City the Walking and Cycling Capital of Ireland. The Vision is there. So let’s make it happen! Is féidir linn!