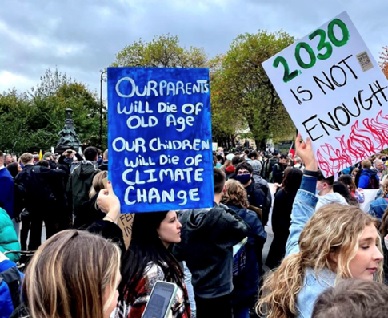 The Secondary Schools’ Students’ & Youth Forum information session held in November was coordinated by Tom Flanagan of the Galway Community College assisted by the Galway National Park City(GNPC) initiative and the Galway Education Centre as part of the Galway Science and Technology Festival.

All bar one (technical connection issue) city secondary school attended this successful inaugural event. A big depth of appreciation is owed to Tom Flanagan and the students of Galway Community College for outlining the results of their survey on teenagers’ views of nature in the city, to Jakub Kostanski of Saute Youth/Youth Work Ireland Galway for telling the young people present of his personal experiences of participating at COP26 in Glasgow, to the student representatives from the secondary schools attending who provided an overview of eco-projects at their educational institutions, and of course to special guest (& GNPC Champion) Duncan Stewart of RTE’s Eco Eye programme for his informative views on Climate Change and for his advice to young people on the issues that it raises.  Brendan Smith acted as facilitator to the event.

Below are the points outlined, discussed and agreed upon:

1.Survey: Creating Our Future and Reimagining Our City

The survey was carried out by students of Galway Community College (GCC) and had been circulated to secondary schools across Galway City in advance of the meeting. It had obtained over 400 responses and was based around finding out about teenagers’ views of Nature’s place within the city’s physical infrastructure, in the lives of its population and on what they hope for the future.

This survey formed part of the remit of GCC students involvement in the European Union’s Erasmus+ programme which focuses on social inclusion, the green and digital transitions, and promoting young people’s participation in democratic life. As part of a collaboration with students from cities in Spain and Croatia, the project endeavours to document and tackle biodiversity loss in urban environments. Participants share ideas and corrective actions that they are undertaking on projects such as reducing habitat loss, rewilding, planting, and promoting educational initiatives as ways to support biodiversity in urban areas.

It was agreed that a second students’ forum with representatives from all of the city’s (& possibly some county) secondary schools will take place on a Friday in February/March around the theme of “Make Galway Greener & Better – What can I do, what can my school do, and what can our city do.”

In the lead-up to Fridays for a Reimagined Galway in February/March, schools will be asked to submit a short video on the environmental (organic gardening, tree planting) and/or sustainability (e.g. rainwater harvesting, solar panels) projects that they are implementing or participating in. These films will be included on the website of the GNPC that can also be accessed via a link from the website of the Galway Education Centre.

As part of an eco-challenge sponsored by the Ryan Institute NUI Galway with €540 in prizes, schools (individuals, groups, classes) are welcomed to submit films of 15-second duration on their favourite location in Galway. Thanks to Charles Spillane for securing this funding.

It is hoped that a directory will be compiled over the next two months of scientific and technology experts from GMIT and NUI Galway who will be able to provide advice to schools on environmental and sustainability projects. GNPC Champion Louise Allcock assisted by Caitriona Carlin are coordinating the university involvement whilst Katie O’Dwyer and Mark Kelly will be involved in the GMIT aspect.

Galway National Park City initiative is hoping to work with its extensive array of corporate, third level and community partners (known as champions) to provide in 2022 and beyond an array of opportunities for second level students to secure worthwhile volunteering placements in the areas of conservation and sustainability.