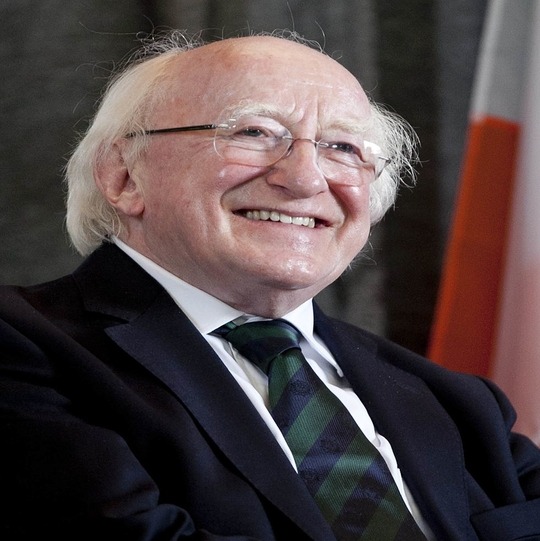 A passionate progressive politician, a poet and writer, academic and statesman, human rights advocate, promoter of inclusive citizenship and education for all, Irish language enthusiast, champion of creativity within Irish society and a keen active environmentalist, Michael D. Higgins has previously served at almost every level of public life in Ireland.
As Ireland’s first Minister for Arts, Culture and the Gaeltacht, Michael D. Higgins achievements included the reinvigoration of the Irish film industry, the establishment of Teilifís na Gaeilge, now TG4, and the repeal of censorship under Section 31 of the Broadcasting Acts. He also established a network of local arts and cultural venues which brought a crucial access to citizens across Ireland to these facilities.
In his ministerial role, Michael D. Higgins became one of the few Irish government ministers ever to enact legislation to protect endangered wildlife and their habitats and to reverse the millennia old destruction and exploitation by mankind of the planet’s natural heritage. He signed, on behalf of the Irish government in 1997, the EU Habitats Directive that requires member states to maintain or restore favourable conservation status for certain habitats and species. Of particular importance were the bogs of Ireland which account for 10% of the world’s total. This Habitat Directive was and is vital to protect the small number of bogs that are classified as Natural Heritage Areas. Peatlands possess unique biodiversity as well as being important areas for flood prevention, water quality and as critical storage areas for carbon, up to 57,402 tonnes of carbon per year (EPA BOGLAND project). He also drove the revitalisation of Ireland’s canal network, resulting in over 1,000 kilometres of navigable waterways, supporting thousands of jobs, and creating wealth in many rural and economically-deprived areas of the State.
As minister Michael D. Higgins publicly supported the grassroots campaign to protect the valley of the Terryland River in Galway from built development and to transform it into a public park for both people and biodiversity. This was successful and it became the 120 acre Terryland Forest Park, Ireland’s largest urban neighbourhood woodlands project and which is now a wonderful mix of habitats including woods, river, wetlands, pasture and meadows.
Today as President of Ireland, Michael D. Higgins is patron of the Galway National Park and an well known advocate for the implementation of the United Nations’ Sustainable Development Goals.