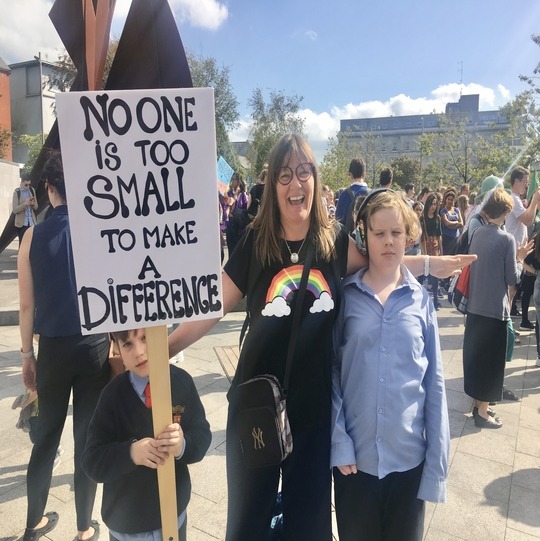 Oisín and Tom Óg are neuro diverse and enjoy a very special way of seeing and appreciating the natural world. They are big fans of Dara McAnulty , a wonderful autistic naturalist, writer and environmental campaigner. Both boys won first prize at the E.S.B creative Tech Fest awards in the ‘TechSpace Sustainability Superheros’ category for their entries ‘Greta Lockdown’ and ‘Our Epic Solar System’, all upcycled from materials that would otherwise end up in landfill. Oisin’s computer coding project ‘AUTISTICALLY AWESOME’, created at Galway City Coderdojo in NUI Galway won first place in his category at the Scratch National competition for Ireland and was also recognised as the judges’ favourite at the ‘ Coolest Projects’ awards by none other than Mitchel Resnick co-founder of Scratch. The project pays tribute to Greta Thunberg, the renowned environmental activist. Both boys have found the CoderDojo university’s computer coding sessions, the perfect medium to address, question and raise awareness around the bigger concerns of today’s environmental crisis. According to mom Helen, the family is very excited for the summer ahead as they recently secured an allotment in Merlin Woods and have some ambitious plans to make it a haven for many flora and fauna.
Helen was diagnosed with breast cancer last October and all three of them appear in this year’s Irish Cancer Society television advert campaign. Growing all sorts of food, fruit, herbs, salads and flowers has never been so important to them as a family and they feel that they have benefitted from the health and wellbeing of being in nature.

The family spent more than two years living in emergency homeless accommodation with no access to cooking facilities for much of the time. So the allotment will bring much healing as it addresses the disconnect between food on the kitchen table and where it actually comes from. Helen states that ‘you won’t miss the water until the well runs dry’, and so is looking forward to growing much of their food on their doorstep in a very built up urban setting.