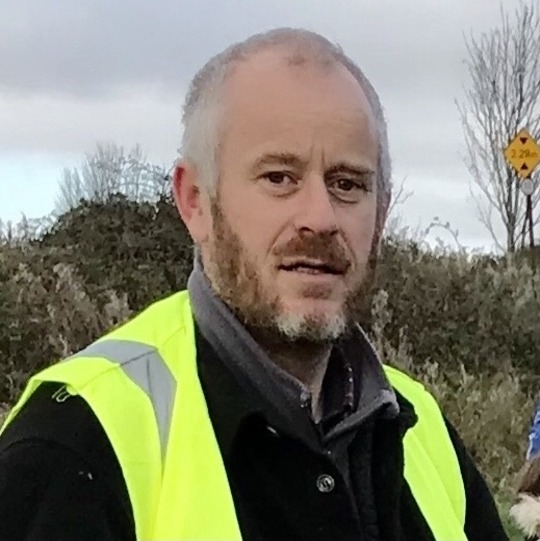 Dan Clabby is chairperson of Conservation Volunteers Galway which was set up by Caitríona Cunningham, another Galway National Park City champion, in 2010. Caitríona had been involved in Conservation Volunteers Ireland in Fingal County Council and she saw a need for a similar conservation scheme in Galway.  In 2015 Dan took over coordination from Una Reddington, who had also kept it all together for a few years before moving on to other things in Co Clare.

Conservation Volunteers Galway are mostly random enthusiastic amateurs (gently guided by some quite qualified and experienced people). During normal times they would work typically once a month on various outdoor tasks for public benefit such as Tree and Hedgerow planting, Seashore clean-ups, Wildflower habitat projects and Woodland path maintenance.

Until 2013 they worked under the supervision of the Galway City Council parks department. Since then they have operated semi-autonomously to Protect, maintain Access to, and promote Awareness of Natural Heritage with biodiversity value.

The Volunteers’ main resource is the energy and enthusiasm of their members who always contribute to an enjoyable atmosphere on workdays. People participate through networks of individuals and groups with a shared passion for ecology and general sustainability.  Indeed many walk or cycle to the organisation’s activities.
Some of their projects started as experimental notions which exceeded expectations, like nesting rafts for resident swans or migratory terns.
Others have had their fair share of trail and error whilst members learned as they went along, for example on wildflower projects where they have used a lazyman’s load of herb growth to competitively thin grasses for a year or two, thus enabling other wildflowers to eventually thrive.
Dan and the team are looking forward to a  resumption of their traditional events, including ‘Walk and Talks’ within local habitats to meet the growing public appetite for natural world and when their stalwarts and new members can enjoy fresh air and some exercise whilst undertaking practical tasks, and gaining satisfaction from doing old-fashioned ‘chores’, like pulling ragworts out of organic hayswards to facilitate traditional late season dry-harvesting, which in turn enables meadow wildflowers to go to seed, ensuring long-term ecological continuation.