Start/End: At the base of the Irish Republican­­­ Monument dedicated to the memory of local men who had fought for the cause of Irish freedom during the Revolutionary Period of 1916-1923.

Surface: Primarily earth and grass along the Mass Path and the Parkmore Boreen whilst mainly tarmac along the road sections of the route

Please note that a considerable section of this route is not suitable for wheelchair users or for cycling. In fact bicycles could damage the soft earth surfaces.

Much of the route was the traditional way for members of local farming families in the period up until the late1960s to walk to Sunday mass in St. Columba’s Catholic Church from the surrounding districts of Parkmore, Ballygar, Monivea Road and as far as Cúil Each-Cahir.

The starting point of this walk is the Republican monument dedicated to those local men who fought for Irish freedom from the Easter Rising in 1916 to the end of the Civil War in 1923. It consists of a limestone Celtic Cross on top of a granite plinth. The structure looks a bit odd as the cross actually is too small in proportion to the size of the plinth. In fact the latter was originally made as a base for a much larger structure. It originally was erected in 1873 at Eyre Square where it held an imposing statute of Lord Dunkellin, a Lieutenant Colonel in the British Army during the Crimean War where he was taken prisoner by the Russians. He later became MP in the British Parliament for Galway city. However for the ordinary Irish people, he was a symbol of the oppressive regime of the Anglo-Irish landlords and his Clanricarde family were infamous for the brutal evictions of tenants during the Land Wars of the nineteenth century. It is said that Clanricarde tenants were forced to contribute to the costs of the statue. On May 27th 1922, the day that the British Army withdrew from Renmore Barracks and left Galway for ever, the statute was pulled down from its plinth and as thousands of people gathered and cheered it was thrown into the River Corrib, never to be seen again.

Years later the plinth was purchased by the people of Castlegar, inscribed with the names of Castlegar republican volunteers and unveiled in 1951 holding the Celtic Cross that we see today. The inscriptions were in Irish as that was the everyday language of the local people at the time.

Leaving behind the monument, one walks up to the St. Columba’s Church. The  building was constructed at this site in the townland of Lachtavarna in1828 and became the first Catholic church for the new parish of Castlegar in 1829. It was reconstructed during the late 1960s with the modernising of the sacristy and the addition of a meeting hall for local groups. To the right of the church is Our Lady’s Grotto erected on the site of a disused quarry. It opened in 1930 and was inspired by a visit to Marian shrine in Lourdes the previous year by the local curate Father Roland.

The entrance to the Mass Path is between the church and the grotto marked by a very narrow stone stile unsuitable to anyone but those walking. The path is bordered on the left side by traditional stone walls and lots of lovely trees and bushes reminiscent of the landscape of decades ago when the whole hinterland was rural. Sadly the right side comprises very high building walls of premises in the Ballybane Business Park that are ugly and intruding covered largely in foam-material sheets, which too often fall off onto the pathway.  The only opening is for a road that backs onto the path that sadly is too often used by unscrupulous people to dump large amounts of rubbish onto the trail. In fact the path was unpassable for decades due to it being blocked with discarded beds, tyres, furniture and other debris until it was cleared in 2010 by volunteers from Castlegar Connect and Terryland Forest Park Alliance supported by local councillor Frank Fahy.

Today it is used by walkers even though some dumping still takes place (though volunteers regularly organise cleanups). At the end of this section of the path lies another stone stile. After stepping over this, one arrives on the nice little tarmac road of Parkmore (Irish = Big Park). The area has a number of residential properties interspaced with fields where rabbits can be seen during the spring and summer months.

The road is a cul-de-sac with a foot and cycle pathway into the busy Ballybrit Business Park.

Turning left and passing by a few houses, one arrives at a picturesque narrow grass-covered country boreen bordered by traditional stone walls and hedgerows that for most of its duration is surrounded by pasture lands on either side. Near the end of the boreen one can see behind a line of non-native conifersI(which look totally out of place), the Parkmore Business Park. The trail ends suddenly with a blocked stile in front and barbwire blocking an opening to the field on the right. In the near distance one can clearly see Ballybrit Castle and the Ballybrit Race Course. Not too many years in the past, the trail continued to the edge of the race course and linked into a boreen used by inhabitants coming over the hill from townlands further north along the Tuam Road. From this hilly area they all enjoyed the sights and sounds of the Galway Races, Ireland’s most famous equine racing festival. In fact many of the locals use to cross into the racecourse (free of charge!). Hopefully some day soon, this boreen can be connected to a pathway at the side of the racecourse that would bring on towards Briarhill.

Go back along the route. But if one wishes, rather than return to the Republican Monument by way of the Mass Path behind St. Columba’s Church, one can walk along the Parkmore residential road until it connects to the Tuam Road and then take the small grassy track to the starting point. 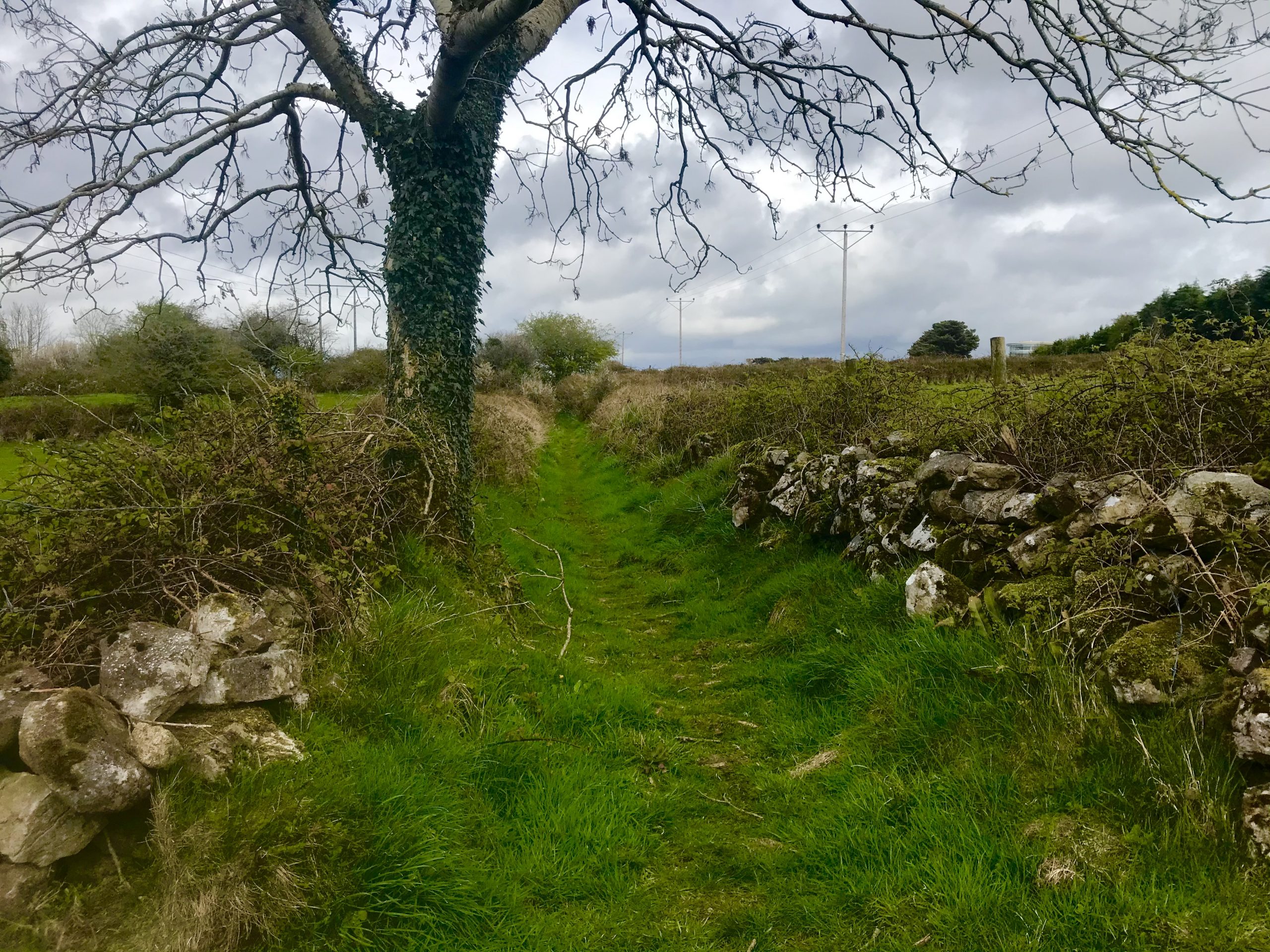 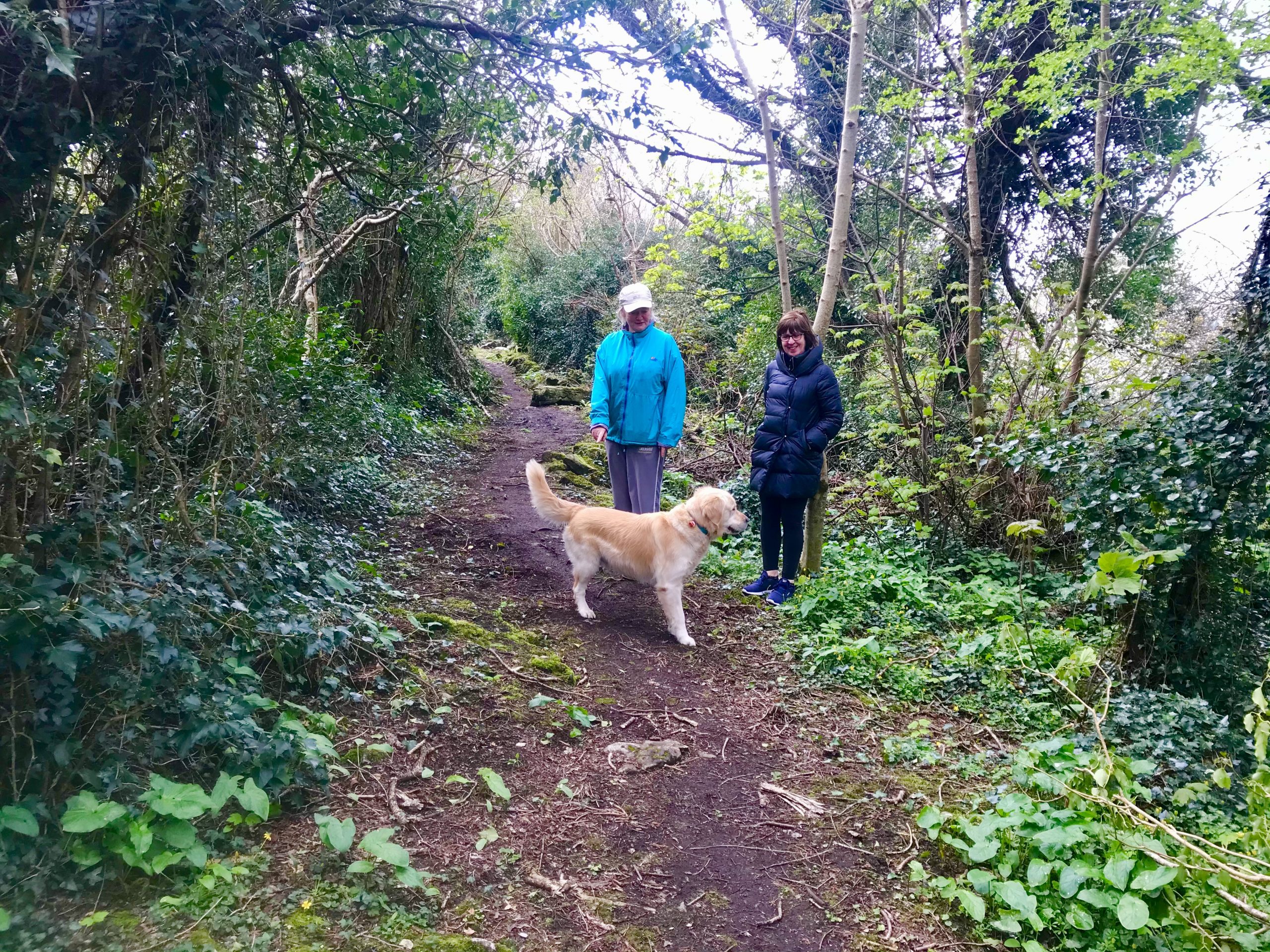